I interrupt this chronicle for an important message from 1998-99

I interrupt this chronicle for an important message from 1998-99

I would be remiss if I didn’t include this information into my story.

With a fire in my soul I set out on a search for answers, what to do next. I wanted be on a bandwagon of advocacy and change. This happened when I stumbled upon (pun intended) an online support group called “Wobblers Anonymous”. I found a chat room where others shared how their lives had changed, ideas for compensation, how difficult it was, and a place to find consolation on a shoulder when needed, which was a lot.

It was this support group that connected me to Lynn Brown, a former airline stewardess and founder of Wobblers Anonymous. When I found the site I couldn’t wait to speak with Lynn and learn more – our first phone conversation lasted more than three hours! During my initial years as a “Wobbler”, Lynn and I shared a passion of supporting, informing and igniting change. She educated me with a wealth of vestibular related information, people I could contact, and how to help support the growing number of people finding the Wobbler’s group. Sadly, still today those numbers continue to grow…

Through Wobbler’s Anonymous I came to know others in Wisconsin who developed ototoxicity from the use of gentamicin. I was shocked to know there were so many… I learned that then Congresswoman Tammy Baldwin was holding a town hall meeting near my home. An idea struck me; why not gather those of us who were in a close proximity to stand with me at the meeting to share our stories and physically show how dangerous gentamicin can be. I contacted those near me and found an amazing show of support and a plan began to take form. To be sure our information wouldn’t be met by just words, I prepared a fact sheet to leave with Congresswoman Baldwin and for the Wobbler’s who accompanied me to the meeting to use in their continued advocacy efforts

Prior to all of us meeting my friend Linde came to my home to assist getting things ready. She helped prepare food, drinks, and set up tables and also stood by to be sure everyone had what they needed. Linde’s support meant a lot to me, and still today she is there when I need her.

After a meet and greet and light meal, everyone who came piled into a couple of cars, with someone not a Wobbler driving, to Congresswoman Baldwin’s town hall meeting. It was great to see so many of us fill chairs. When it came time to voice concerns in my district, I stood up to share my story as did the others. We stood in solidarity voicing our concerns and the right to ask for an investigation into administrating gentamicin outside the limits which the FDA clearly established. So, this set the ball rolling and with other contacts established, through friends with connections, past co-workers, and government officials. I kept at it and finally our stories and concerns reached then Secretary of Health and Human Services, formally Wisconsin Governor, Tommy Thompson. I accomplished this through a lengthy meeting with Governor Thomson’s wife, Sue Ann Thompson, the founder of the Well Woman’s program based in Madison, WI. That spurred some action, but still it took a long time. At least the powers that be were introduced to our nightmare due to serious side effects that can occur using gentamicin to treat bacterial infections. It was hoped that our efforts would ignite a trickledown effect for education on the proper use of this antibiotic. At least in the hospital I was treated I found changes. Not sure if this was because of my case or the power of standing up to the big guys.

In 1998, Lynn’s story came to the attention of a producer from the Oprah Winfrey Show. A few weeks later a film crew showed up at Lynn’s home to tap a segment to be used for Oprah’s show. Prior to the taping, and with Lynn’s help, I flew to her home in Alabama, my first flight after losing my balance. This was a truly a frightening experience and how I managed this I will never know… I tried to shake off fear and terrifying moments of getting lost in the terminal as I tried desperately to navigate around people, places and things looking for my gate. In order to see what was in front of me I had to pause, stand as still as I could to determine obstacles to work my way from one place to another. At one point I froze at the bottom of an escalator. A big thank you to the kind gentleman who saw my predicament, grabbed my suitcase, and held on to me and my cane as we made our way to the top, a wonderful display of compassion from a total stranger.

Lynn kindly invited me to stay at her home for a few days, prior to and after the camera crew to film the segment. There was a shared excitement when they arrived to film Lynn, and other Wobblers Lynn graciously invited to share their stories about how they too developed ototoxicity from the use of gentamicin. Lynn shared her story beautifully and candidly, as did everyone there. It was humbling and a time filled with my admiration of Lynn and for the first meeting others who experienced the same life changes I had. Very humbling…

Lynn asked me to accompany her to the live taping of the Oprah show in Chicago where the film from Lynn’s home was shown. Again, Lynn exuded her candid presence as Oprah asked questions. Although I played a much smaller role, I was there and I learned a lot from Lynn and the lights, camera, action experience which later laid a great foundation as I began sharing my own story. I won’t lie, I was nervous – it was OPRAH for heaven’s sake!

What Lynn and I shared that day is very important. Because of Oprah, and her show called “Prescription for Disaster”, the goal was to examine the tragic side effects of medications; we were able to reach a lot of people to the risks of gentamicin. I was honored that Lynn invited me to join her on the show and will always be grateful to her for that opportunity. It was also a thrill to meet Ms. Winfrey!

In 1999 Lynn invited me to accompany her on a trip to Portland Oregon to take part in vestibular research at the Legacy Health Systems. Those we met worked under the supervision of Dr. Owen Black, a legend in his research concentrating on the vestibular system and how its loss affects postural control as well as the wide range of other physical and cognitive functioning. It was an honor to meet Dr. Black while in Portland. His presence was powerful.

To give you an example of how important Dr. Black’s was to research, he led investigations with NASA to examine how space flight affects astronauts when they return to earth. Dr. Black’s focus was on how astronauts return affected their vestibular system. Did you know that when astronauts return from space they experience some of the same balance and visual symptoms as those of us with ototoxicity? Well, they do.

Dr. Black guided many studies in how aging affects balance and a variety of other vestibular conditions. His dedication to supporting persons with vestibular dysfunction led him be a major influence of founding the Vestibular Disorders Association (VEDA), http://vestibular.org/. The goal of VEDA is to help people understand vestibular disorders, how to cope, assist them finding resources and provide tips on how to compensate. Sadly, Dr. Black passed away May, 2012 but certainly left a lasting legacy.

The experience in Portland was my first experience in the research world, as well as becoming a test subject. I was tested on a lot of strange and startling looking equipment that I was strapped in, buckled in, or secured by a harness. I underwent tests unlike anything I had ever experienced with the goal of assessing the damage to my vestibular system, visual effects related to oscillopsia or also known as ocular control, as well as postural control. Here are some photos from that experience: 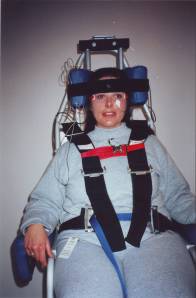 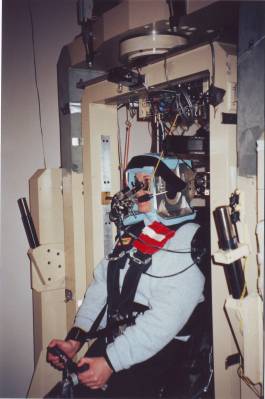 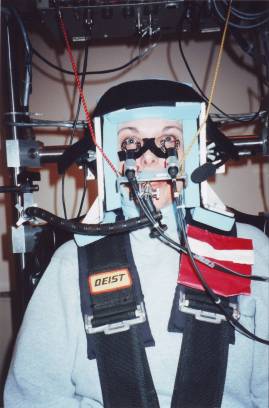 So in 1998 my first bouncy, blurry look into the world of research took place. When the tests were finished I was anxious and exhausted, but wanted to know more. Sharing this experience with Lynn ignited a true sense of admiration of her commitment, strength, and concern for others.  I was fortunate that Lynn shared the Portland experience with me. I was able to share with others what she taught me. In future chapters I’ll tell how I tried to give back what she gave me.

With the Portland experience behind me, how was I to know that a few years later in a tiny lab in Madison, Wisconsin an amazing thing would happen. This is where Dr. Paul Bach-y-Rita entered my life. Let’s return to that part of the story… Interruption complete.

Thank you for visiting, I hope you are enjoying my photography. I've happily been a photographer for over 25 years making it a passion of mine. My work has been inspired by places near and far, those I never thought I'd visit and by the work of others I so very much respect from whom I've learned so much. The vibrant colors of the outdoors take me home and when they stand still just long enough for me to admire and capture them in landscapes, forests, flowers, all things our beautiful world holds, I find myself complete. I hope you enjoy my work and give my page a like. I'd love to see you here.
View all posts by Cheryl Schiltz Photography →
This entry was posted in Uncategorized. Bookmark the permalink.