Posted on May 18, 2013 by Cheryl Schiltz Photography

The moment had arrived!  It was time to see what this sensory substitution stuff was all about.  Mitch showed me to a seat in front of a computer screen and a metal box with a knob sticking out of the side of it.  There was a long two inch wide computer ribbon attached to the box.  At the end of the ribbon was a small squared area where placed in a 12 x 12 pattern 144 tiny electrodes were set. 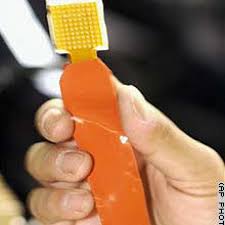 Included with this equipment was a joystick like the kind used in an older type video game and, a blindfold.

The computer was turned on and a maze appeared on the screen with a place indicator flashing at what I assumed was the entrance to the maze – kind of like a PacMan video game.  Not very scientific looking I thought… 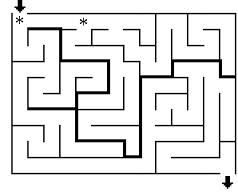 Mitch went on to explain the metal box contraption which I came to know as the “TDU” or Tongue Display Unit.  He explained that by turning the knob on the contraption an increase or decrease of an intensity of a type of non-electrical current would occur from the 144 electrodes at the end of the computer ribbon.  Oh….

Then Mitch asked me to place the end of the ribbon into my mouth and place the electrodes on my tongue.  I’ll admit, I was a bit apprehensive thinking that it was going to be like testing a 9 volt battery with my tongue!  Thankfully, that did not happen, actually, I didn’t feel anything at all.  Then little by little I turned the knob increasing the intensity until I felt a tiny tingle on my tongue, like champagne bubbles.  I giggled and said it tickled!  I played with the intensity for a while to get the sense of how much intensity I needed to feel, and to familiarize myself with how to dial it in just right.

Then Mitch and Yuri explained that the maze on the computer screen was directly programmed to the TDU and that by using the sensations I was going to be feeling on my tongue, I should be able to navigate the maze by moving the joystick according to the sensations I would feel on my tongue!  What?  Really?  I will admit, given my attempts at playing video games, that I am a video game, joy stick challenged individual, so I wasn’t so sure I would be able to navigate any of the maze!  Even so, I couldn’t wait to try this out!

After some training on to how to move the joystick according to what I felt on my tongue, I had my first dance with “sensory substitution”.  As I sat in front of the computer with champagne bubbles tickling my tongue, a computer ribbon hanging out of my mouth, with joystick in my hand and blindfolded, I navigated that maze from start to finish!  I was “seeing” through my tongue!   From the sensations I was feeling on my tongue I was able to move forward – that was a tingle I felt that moved from the center to the front of my tongue.  Turning right was a tingle that moved from the center of my tongue to the right side, turning left was a that tingle from the center to the left side.  Oops, ran into a wall, should’ve turned right!   The left and right tingles helped me navigate around corners!  Going down stairs I felt the tingle move while pulsating from the center to the front of my tongue and to go up I felt a pulsing from front to center.  Amazing, huh?   I worked my way around that maze with only those sensations guiding me until suddenly; there I was, at the end of the course.  Absolutely unbelievable!  I wanted to do it again, and again, and again…  So I couldn’t rely on memory, Mitch and Yuri switched between variations of the maze adding differences to the test and making it more challenging.  Each time I was able to successfully navigate the maze and make it all the way to the end!  I sometimes bumbled coordinating the joystick movements with the sensations on my tongue but to my surprise and sheer delight, I completely made it though those mazes – blindfolded…  I was “seeing” with my tongue!  Seriously, seeing!!!  I took the blindfold off to see the same surprise and sheer delight shining from Paul, Mitch and Yuri.  It was a magical moment.  I should mention here another very important person who was  involved in the invention of the TDU device, Kurt Kaczmarek – an electrical and biomedical engineer and scientist.   He was quite excited to see what just happened too!

For the first time in a very long time I felt some surges of excitement, intrigue, joy and happiness myself.  I had a glimpse that there may indeed be hope for better life, but still, I had to ask, what does this contraption have to do with helping me with my balance?   It was simple said Paul, “We will begin by testing you with the device to see if a sensation you will feel on the center of your tongue can retrain your brain to feel balance again”.  Without hesitation I said, “Okay then, let’s do it”.  At that confirmation, in a tiny lab on the University of Wisconsin-Madison campus there was an overflowing of excitement as all of us, Paul, Mitch, Yuri, Kurt, and I began talking about the balance application and just how and when we would begin the tests.  Here is where I became a researcher and co-investigator of a device that changed my life forever.

However, something more happened that day I first tested the TDU.  A very prominent feeling appeared; that of peace and quiet.  For the first time since 1997 I felt reconnected to my environment and for that short time, I heard… silence… 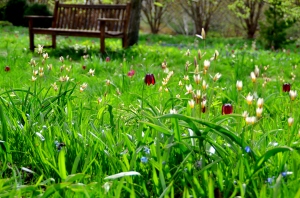 Thank you for visiting, I hope you are enjoying my photography. I've happily been a photographer for over 25 years making it a passion of mine. My work has been inspired by places near and far, those I never thought I'd visit and by the work of others I so very much respect from whom I've learned so much. The vibrant colors of the outdoors take me home and when they stand still just long enough for me to admire and capture them in landscapes, forests, flowers, all things our beautiful world holds, I find myself complete. I hope you enjoy my work and give my page a like. I'd love to see you here.
View all posts by Cheryl Schiltz Photography →
This entry was posted in Disability, Disability Noise, Inspiration, Motivation, Non Fiction, Ototoxicity, Perception, Rehabilitation, Research, Self Help, Sensory Substitution, Tongue Display Unit, Vestibular System and tagged brainport, cheryl schiltz, gentamicin, Kurt Kaczmarek, madison, Mitchell Tyler, norman doidge, ototoxiciity, paul bach-y-rita, perception, silencing the noise of disability, University of Wisconsin, wisconsin, Yuir Danilov. Bookmark the permalink.